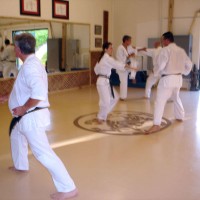 What happens during a typical karate practice?

This, of course, depends on the level of the particular class. All karate practitioners practice three elements, however:

What does karate practice have to offer over other forms of exercise?

Do I have to be in great physical shape to start?

No. All students, regardless of their pre-practice level of conditioning, should start gradually. Younger students can usually train hard from the first practice. The instructor should monitor the readiness of each student for increasingly complex and demanding forms of practice.

If I train regularly, how long will it take to obtain a black belt in Shotokan Karate?

On the average, four or five years if you train three to five days per week. 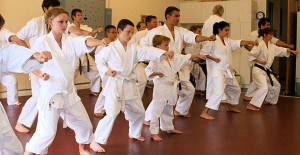 What about karate practice for children and adolescents?

Once a child starts school, they can train in karate. Children and adolescents are taught the same techniques as older students. Training and practice techniques are more varied for younger students, however, because of their shorter attention spans.

For a child or adolescent to make steady progress in a martial art, like Shotokan, they should practice at least twice per week on a regular basis.

How does one advance in Shotokan Karate?

A level in White and Brown Belts is called a kyu. A level in Black Belt is called a dan. As an example, Mr. Lechuga is a Go – dan, or “fifth level/rank” Black Belt. Rank can be awarded by third, fourth, and fifth degree Black Belts only.

To grade, students must join Shotokan Karate of America. This costs $75.00 per year. When you join, you receive a monthly newsletter and student handbook, which provides detailed information about SKA and karate practice. There is no charge to grade in Shotokan.

What equipment does a new student need to start practice?

We recommend a gi (loose fitting training garment). The gi comes with an obi or belt. The instructor or senior students will show new students how to tie their belts properly.

No jewelry or shoes are allowed on the training floor. It is highly recommended that students have mouth guards, hand guards and breast protectors (for women) for kumite practice. 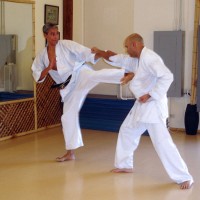 Who can train in karate?

Really, anyone. Depending on age and physical make-up, practice can be adapted accordingly by the instructor. Remember that Shotokan Karate is a traditional martial art not a “Sport,” per se. Students who wish to learn sport-oriented techniques, such as tournament fighting, can do so. In fact, we encourage younger brown and black belts to go through a stage of serious tournament fighting.

Tournament fighting does have a downside, however. Real fights are not decided according to points. Sometimes, tournament fighters develop bad habits unless they emphasize realistic techniques to vital points. Again, it is the instructor’s responsibility to oversee this type of specialized practice.

So how does one start karate practice?